The full Moon ablaze in the night sky

Beams down on the dead and dying Cider Gums

Their ghostly silhouettes, so white and stark

Now just a reminder of the past

The Central Plateau, the High Country of Tasmania

Is or was home to these magnificent trees

That the environment in which they flourished has changed

Used by the aboriginals, settlers and trappers

The Cider Gum leaf, was used to make cider

And the sweet scent used to freshen homes

Once so prevalent and used in a variety of ways

Their limbs and branches bleached white by the sun

Many attempts have been made to re-introduce the gums

But the changing environment and pressure from the wildlife

Has meant that the Cider Gum is facing a loosing battle

For the seasons have changed, not enough rainfall and hot summers

Such a unique and magnificent shade tree, stepped in history

Will soon be a distant memory and extinct

For I have doubts that mother nature can revitalize Eucalyptus Gunnii 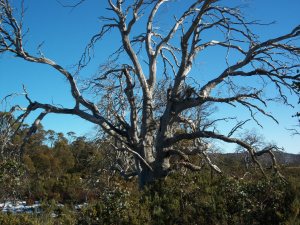